In Greece there are so many beautiful and interesting places, that sometimes it is difficult to plan the desired route.

The route we recommend here is ideal if you want to make not only a cruise on the Greek islands in the Saronic Gulf, but also to get acquainted with the richness of culture and the history of the capital of the country - Athens.

The port of Alimos (or Kalamaki), located just 15 km from Athens, is a good starting point for renting a ship (catamaran, sailing boat or yacht) and traveling through the islands of Kay, Serifos, Thira (Santorini), Astelapia, Tilos 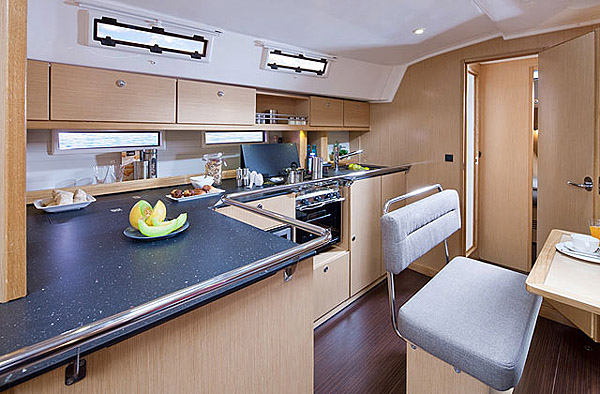 Yacht:  Bavaria 45 Cruiser the perfect option for a comfortable rest!

Rest on a yacht is a reality, not a dream!

And you can get the captain's licence right on the yacht!

The price does not includes:

* - If you want, you have the opportunity to undergo training on a yacht and get the international captain's licence.

Route around the Cyclades Islands

Аthens. The city is the birthplace of democracy that keeps traces of "the same Greece", the image of which from the childhood arose in the minds of most of us. It's about the Athens Acropolis with majestic  sculptures, sanctuaries and temples, the most famous of which is the Parthenon 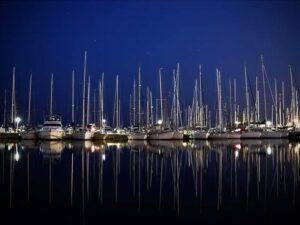 . At the foot of the Acropolis, by all means walk along the Plaka - the oldest part of Athens, where the street of the Roman Emperor Hadrian was built in Antichnesti. Attention deserves the modern part of the city: numerous markets, taverns, shops, spacious squares and wonderful shady parks.

Кea. The closest to Attica from the Cycladic islands. It is a mountainous island, with the exception of the interior with oil trees and streams flowing toward the creeks, the canals of which are covered with shrubs and oleanders. Characteristic Cycladic architecture with picturesque narrow streets with arches and ancient houses, a beach full of bays, clear sea water and the breath of a fresh trade wind - all this will help you forget about noisy cities and enjoy nature.

Serifos.  It is famous for its delicious food and relaxed atmosphere. This is one of the most popular routes among Greek tourists, who managed to preserve a special island style, despite the fairly well developed tourism. 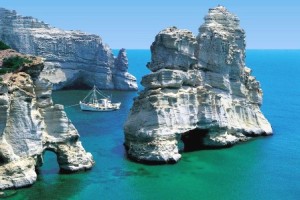 Serifos is Love! High, wavy hills alternate with small and fertile valleys, which cover this picturesque island. The rocky coast is deeply riddled with a series of coves and bays.The scales resemble human figures, which invite you to recall the myths of Danae, Perseus and Medusa.  The rocks, as if they decided to keep it for you and turned these heroes into stone.

Мilos. The glory of the island spread all over the world thanks to the discovery in the XIX century. a statue of Aphrodite - a masterpiece currently in the Louvre. The main port, Adamas, with one of the most natural bays in the Aegean Sea, is a picturesque town with paved streets, whitewashed white houses with dazzling balconies and sung by the smelling bushes of "armirikya" (saltwort). We recommend here to visit the Museum of metals with a rich exposition of mineral resources of the island.

Santorini.  A group of five islands of volcanic origin, arranged in the form of a ring. There is a legend that Santorini is sunken Atlantis.

Santorini – the second name of the main island of this group, Tire, where the first population appeared in 3000 B.C. This is the most popular place in Greece, 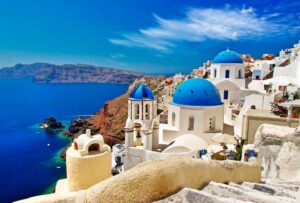 attracting millions of tourists annually. Fascinating volcanic landscapes, beaches with black and red lava sand, ancient archaeological monuments are the main values of this land. Small towns are enchanted by snow-white houses and churches with bright blue domes, there are a lot of entertaining establishments, restaurants and cafes.

Astypalea. Outlines similar to a flying butterfly. Mountainous, with lush vegetation and a rugged coastline, the island attracts tourists with its luxurious beaches. In the summer season, noise, animation, fun and joy reigns in the center of the island, however there are also quiet corners hidden from the extraneous gaze. The city of Astypalaia itself is situated on the top of a hill in the center of the island. Here in the 13th century on the territory of the ancient Acropolis was erected a fortress, which is perfectly preserved to this day. It is definitely worth a visit while spending your holidays in Astypalee. Visiting the fortress you can plunge into the past with a rich collection of art and enjoy incredible seascapes opening from the top of the hill. The west coast of the island of Astypalea is known for its delightful beach and the beautiful waterfall of Agios Ioannis. Here are preserved the ruins of the Byzantine fortress. In this western part of the island is its main resort - Livadia.

Тilos.The island is located near Rhodes, there are only three hundred permanent residents there: it is this solitude that gives it a special charm. The island is rocky, except for the only fertile plain that lies in the middle of the island and ends with the beautiful sandy beach of Eristos - a wide strip of continuous sugar.