We want to show you an incredible and, as yet, little known region for yachting - Malta.
The Maltese archipelago in the Mediterranean is located between Sicily and North Africa and is known for its calm cruises, protected by anchorages and long sailing season.

Sea areas: the three main islands - Malta, Gozo and Comino make up the archipelago, along with the small uninhabited islands of Cominotto, the island of Delimar, Filfla, the islands of St. Paul / Selmunet and the island of Manoel.
Weather: The temperature in Malta has a typically dry, Mediterranean climate, which gives a long swimming season. In spring, the temperature is around + 20ºС, and in the summer months it reaches an average peak of about +30 ºС. Even in the fall, you can enjoy warm days around + 24ºС until mid-October. In this place there is little rainfall, the peak of which falls in late autumn and winter.
Language: Malti is a local language, English, French, Italian, Spanish and German are also widely used.
Cuisine: Traditional Maltese cuisine is a mix of European and Arab traditions, as well as local flavor. The focus is on spices, seafood, fish and vegetables.
Currency - Euro. ATMs are generally available. Banks are open from Monday to Friday, some are not open on Saturday morning. 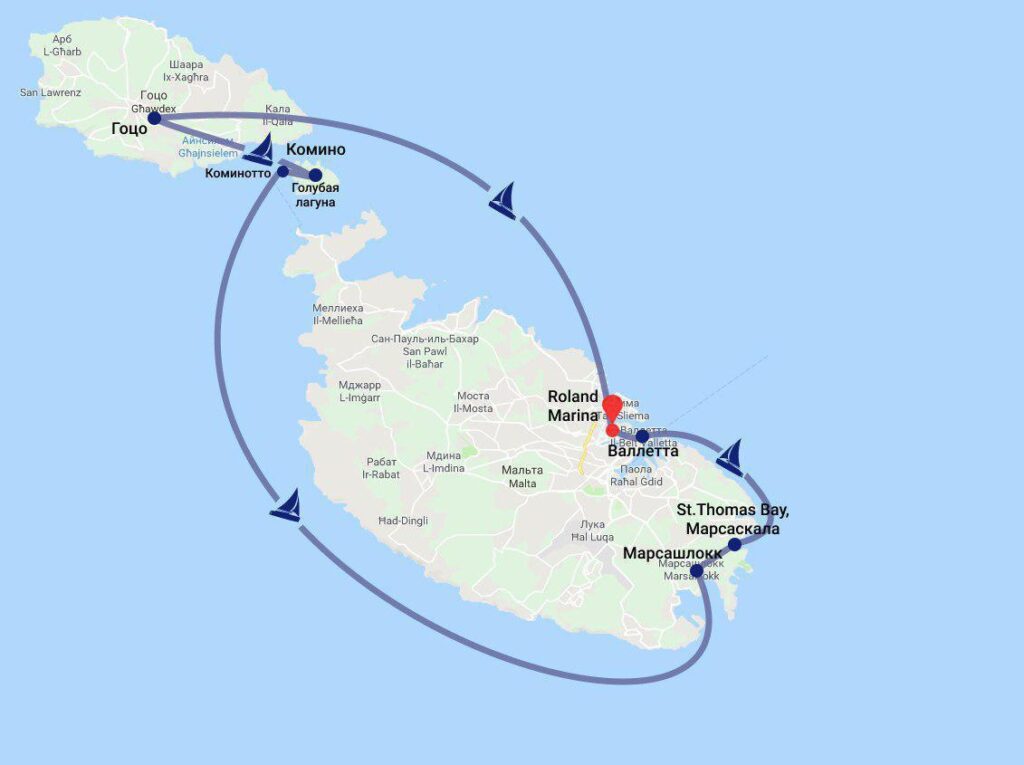 Day 1: Roland Marina.
Embark from our base in Roland Marina, in Ta’Xbiex, a small town situated in the center of Malta, not far from the main city of La Valette and Birgu, also known as Città Vittoriosa (“Victorious City”). 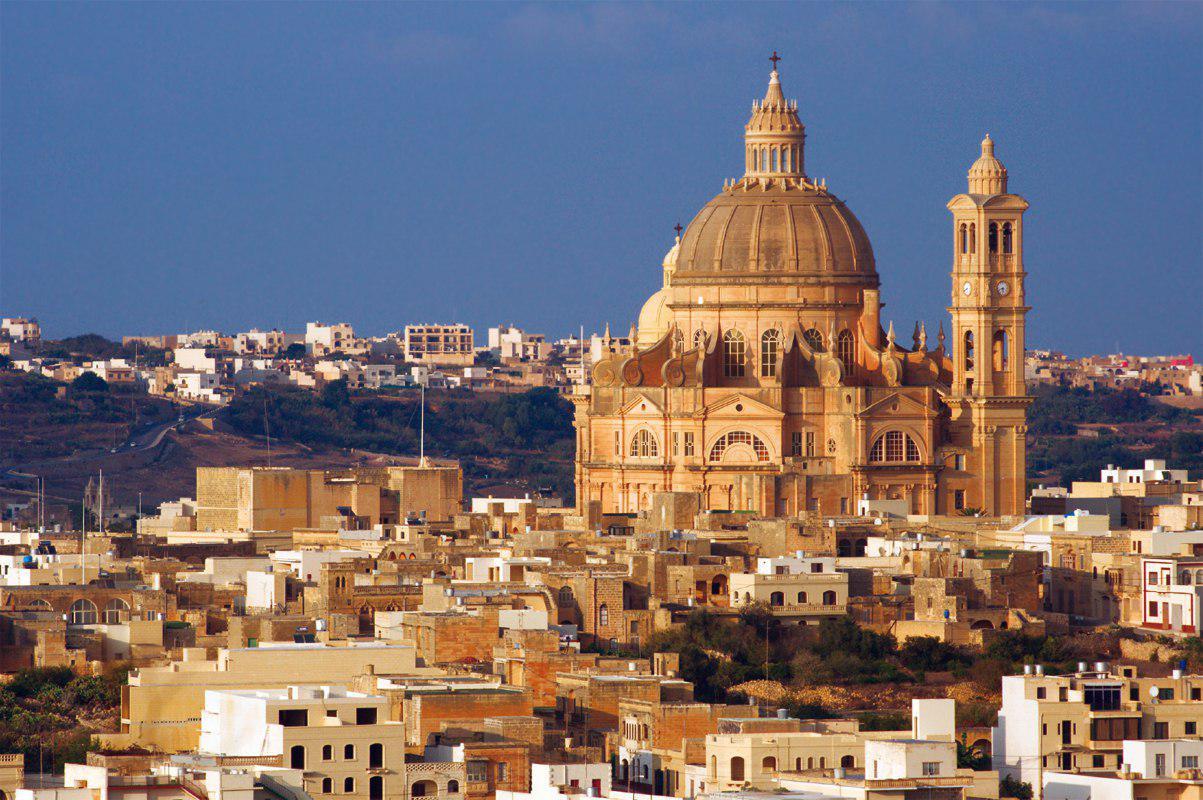 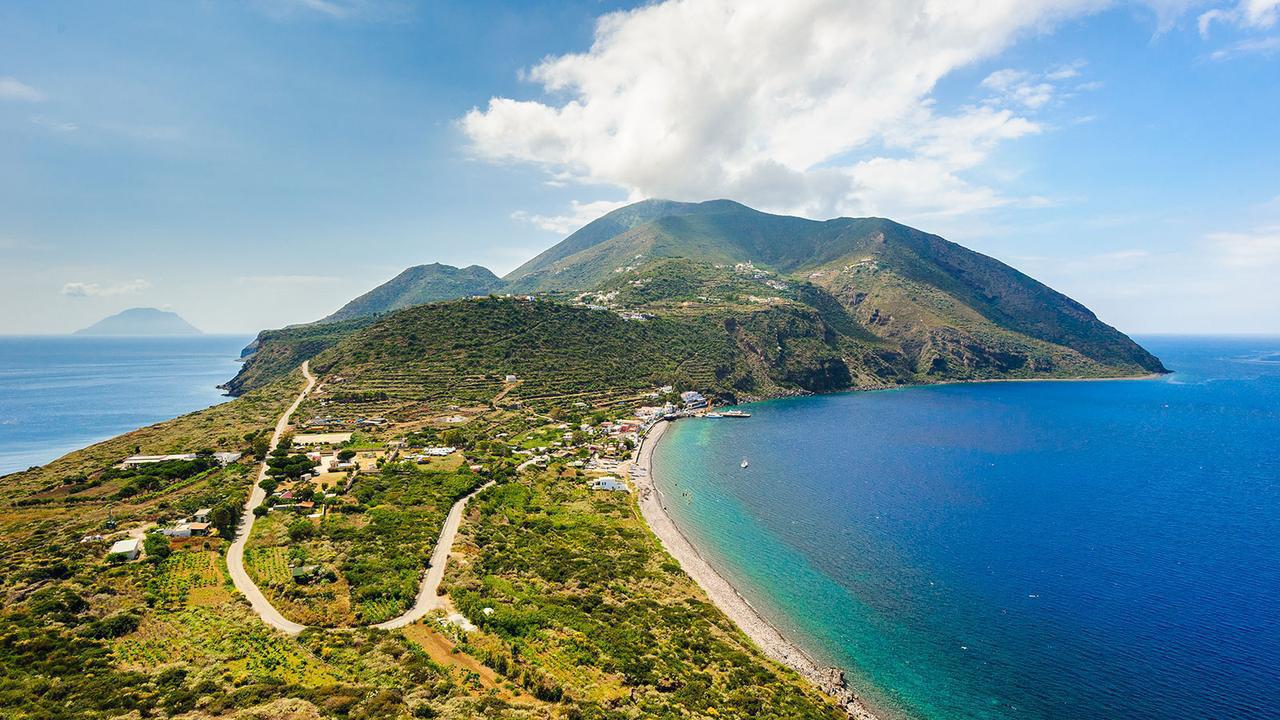 Set sail to Gozo, also known as the “Island of Calypso”, because a legend says that Calypso kidnapped Ulysses and kept him here for seven long years. It is here you’ll find many notable natural features like the Inland Sea and Wied il-Mielaħ Window, a famous arch much like the Azure Window. Choose from the island’s many beaches and seaside resorts that are popular with both locals and tourists.
Stop for lunch at Mellieha Bay, the largest and one of the most beautiful and popular sandy beaches in Malta. 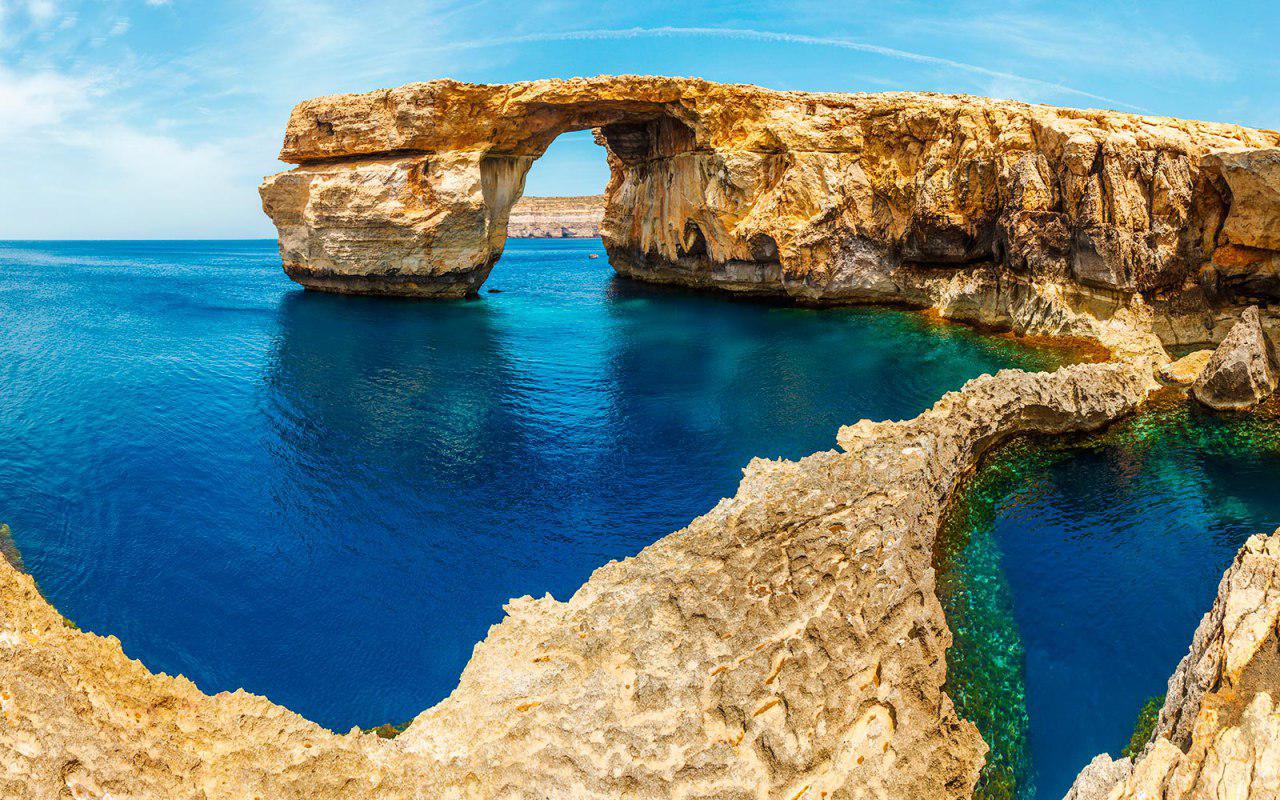 Discover Dwejra Bay, one of the best places on the island, where some scenes from Netflix smash, Game of Thrones were filmed. Not far from here, you will discover the Azure Window, natural stone arch that partly collapsed in 2017 during a brutal storm, although you part of the arch is still visible.
Take some time to explore one of Malta’s most famous dive sites, the Blue Hole, a fantastic 10m wide inland sea pool leading into a large crevice and through to the open sea. The rocky point near the site known as “Coral Gardens” is ideal for snorkeling.
Stop at Ramla Bay, famous for its golden orange sand. Make sure to walk to Calypso’s cave and the sandy path that leads to this beautiful cave is believed to be the place where Ulysses was held captive. 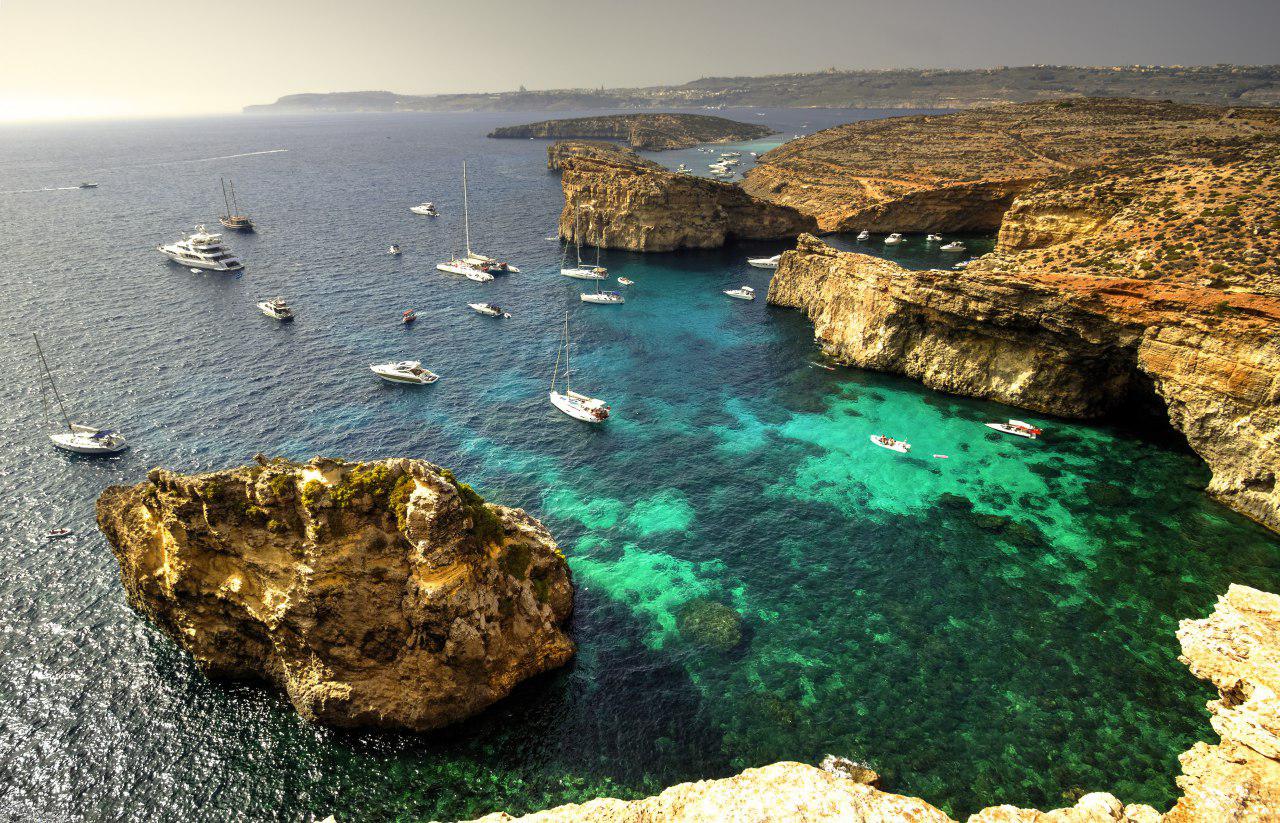 Blue Lagoon is one of the most famous Maltese beaches lying on the Northern coast of Malta. It’s a small bay with shallow, cyan waters that lies between the main island, Comino and Cominotto (an uninhabited rock-sized island). Spend the day enjoying the view, relaxing on the white sand beach and discover the marine life with your mask and snorkel. Comino is an animal sanctuary and a natural reserve, and the entire island and surrounding islets are part of the Natura 2000 Network. 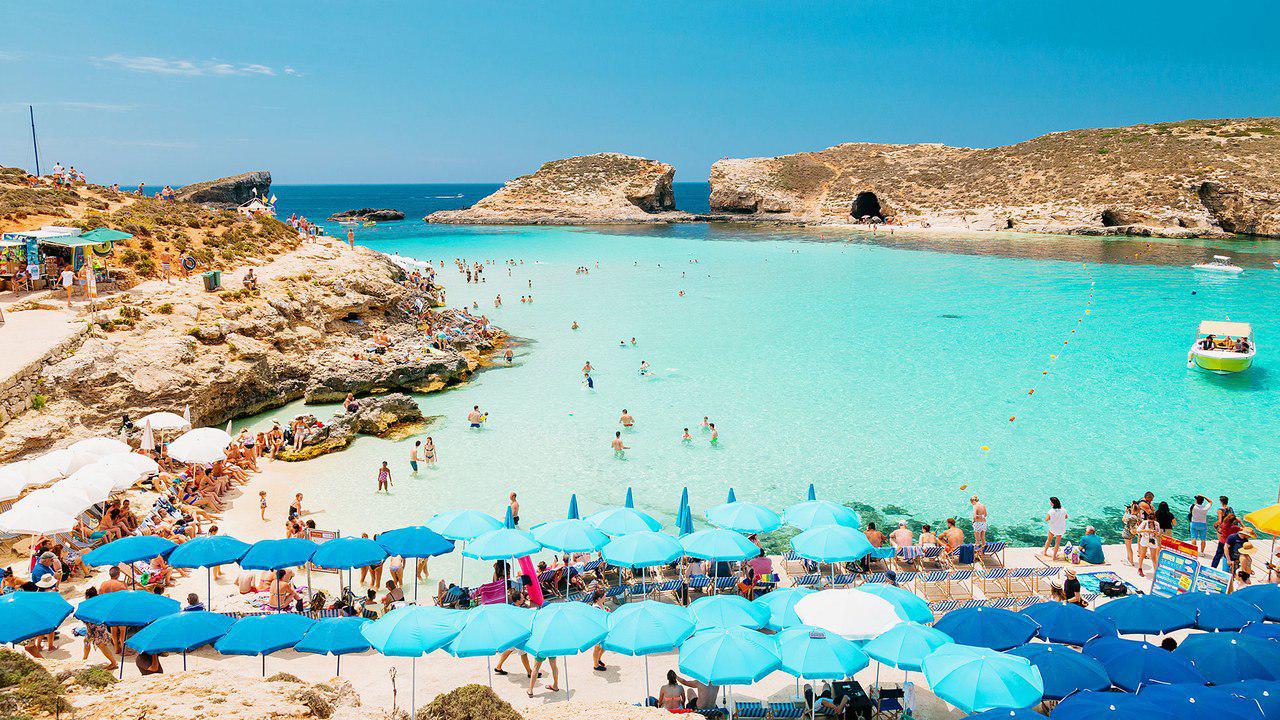 Set sail to the west side of the island. You can stop at Anchor Bay, where you will find the Popeye Village in a cove with turquoise waters, a strange wooden village built in 1979 for the film POPEYE, in which Robin Williams starred.
Continue to Dingli cliffs, the highest point of Malta, around 253m above sea-level, with fantastic open sea views.
On your way to Marsaxlokk, discover the Ħaġar Qim temples – a megalithic temple complex dating from the Ġgantija phase (3600-3200 BC). They are among the most ancient religious sites on Earth, described by UNESCO as “unique architectural masterpieces” and recognised as a World Heritage Site in 1992 with four other Maltese megalithic structures.

Day 6: Marsaxlokk – Marsacala Bay (5 MN).
Marsaxlokk is 12km from Valletta and is where the first Phoenician sailors landed in the 9th century and set up business. Today, this small village has become the largest fishing port on the island. It is also the most impressive with its brightly colored boats painted with the Eye of Osiris at the bow and its Sunday fish market.
End your day at Marsacala Bay, an ancient fishing village in Malta with a wonderful bay. Marsascala’s bay has a promenade continuing all the way to St. Thomas Bay with views over the rocks, vibrant fishing boats and saltpans. In summer, the village is buzzing with life and many Maltese families have summer homes here. 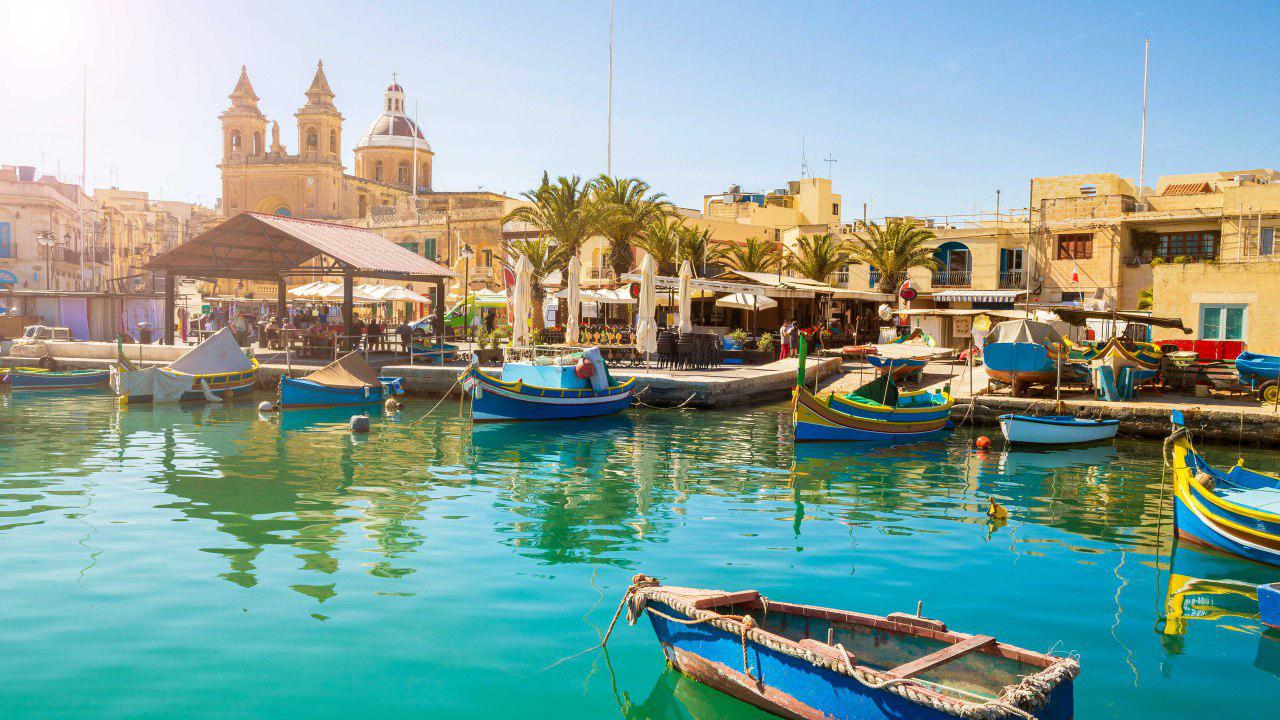 On your last day, disembark to discover Valletta, the capital city of Malta to immerse yourself in the rich history of the twists and turns of the island and its most famous protagonists, the Knights of the Order. The city is baroque in character with elements of mannerist, neo-classical and modern architecture. It was officially recognized as a World Heritage Site by UNESCO in 1980.

The price does not include: