in Olbia there is something to see. In particular, a lot of ancient buildings, churches or - the "highlight" of the town - archaeological excavations, narrating about the rich history of this area in ancient times: nuragi and "graves of giants". Finds made there can be seen in the magnificent Archaeological Museum.

To the category of "antiquities" also include Punic necropolis, ancient city walls and Roman baths. Of the "medieval" attractions notable Romanesque church of granite San Simplicio. The 17th century was marked by the charming St. Paul's Cathedral.

archipelago Maddalena (now - the national park). The archipelago consists of several large and small islands, but it costs at least one - Budelli (known for bringing it to the pink beach).

The archipelago of La Maddalena, consisting of 60 islands and islets near the north-eastern coast of Sardinia, in 1996 became the island's first national park. Granite and shaly islands of the archipelago have particularly favorable geological and marine natural conditions associated with the lack of significant changes that could have a negative impact on the natural environment of the island. The park covers an area of 50 square meters. km and stretches along the coast for 180 km. 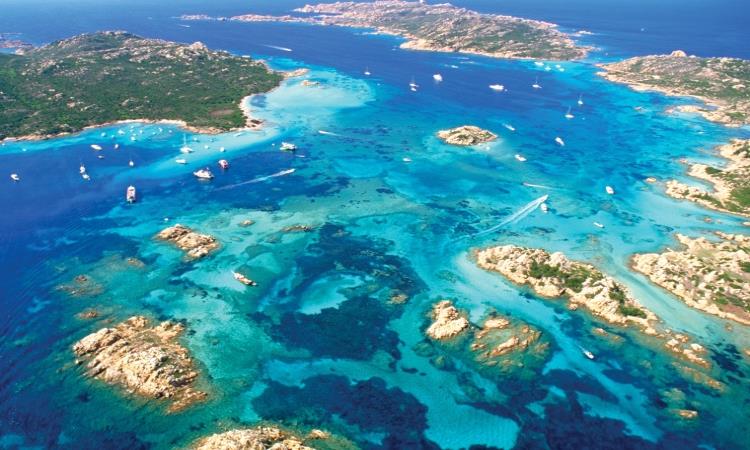 On the hills framing a deep blue bay 25 km to the northeast of Bonifacio, is the small town of Porto-Vecchio, considered one of the most beautiful ports in Europe. 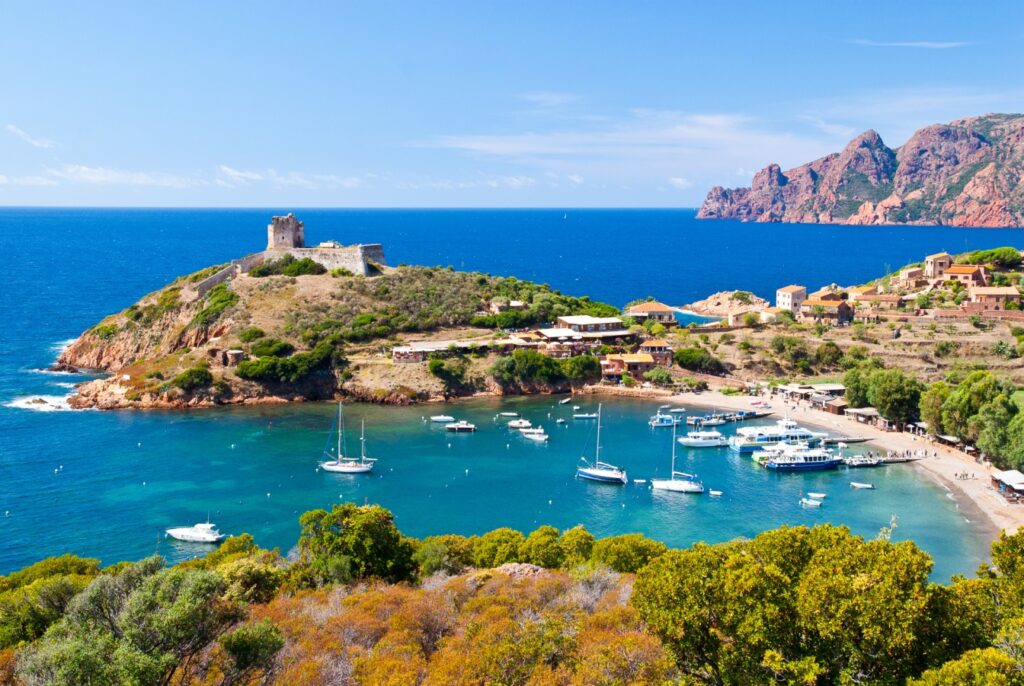 Founded in 1539 as the second Genoese citadel on the east coast of Corsica (after Bastia), nowadays this picturesque port has turned into a major tourist center, attracting first and foremost wealthy Italians. However, in addition to a well-preserved fortress and a small historical core with its winding streets, there are almost no historical monuments in the city itself.

But around it, the real expanse for a demanding tourist is the green forests surrounding the small town of Zonza, and the statue of Notre Dame des Nigues on Mount Bavella (1218 m), the spectacular mountain range of Ospedale, archaeological complexes in Casteddo d'Araggio (Castedo d'Araggio, 12 km north of the city) and many picturesque mountain sites.

Beach tourists attract the beautiful shores of the Palombaggia gulfs (Palombaggia, the most beautiful beach on the island), Porto-Vecchio and Santa Giulia. Excellent beaches are also near Pinarello (Pinarello) and San Cipriano (San Cipriano).

7 things to do in Bastia i.Corsica

The birthplace of Napoleon Bonaparte. This is the main tourist resource of the city, which is the center of the department of South Corsica and at one time was "appointed" by Napoleon as the capital of the entire island. The Napoleonic heritage is emphasized in every way, but among the people its cult is not as strong as one might think - in the traditional Corsican perception, strangely enough, it is more likely that the Frenchman. Napoleon's birthday is celebrated on August 15, but much more Corsicans are proud of the fact that in Ajaccio in 1984 the pop singer Alize was born. 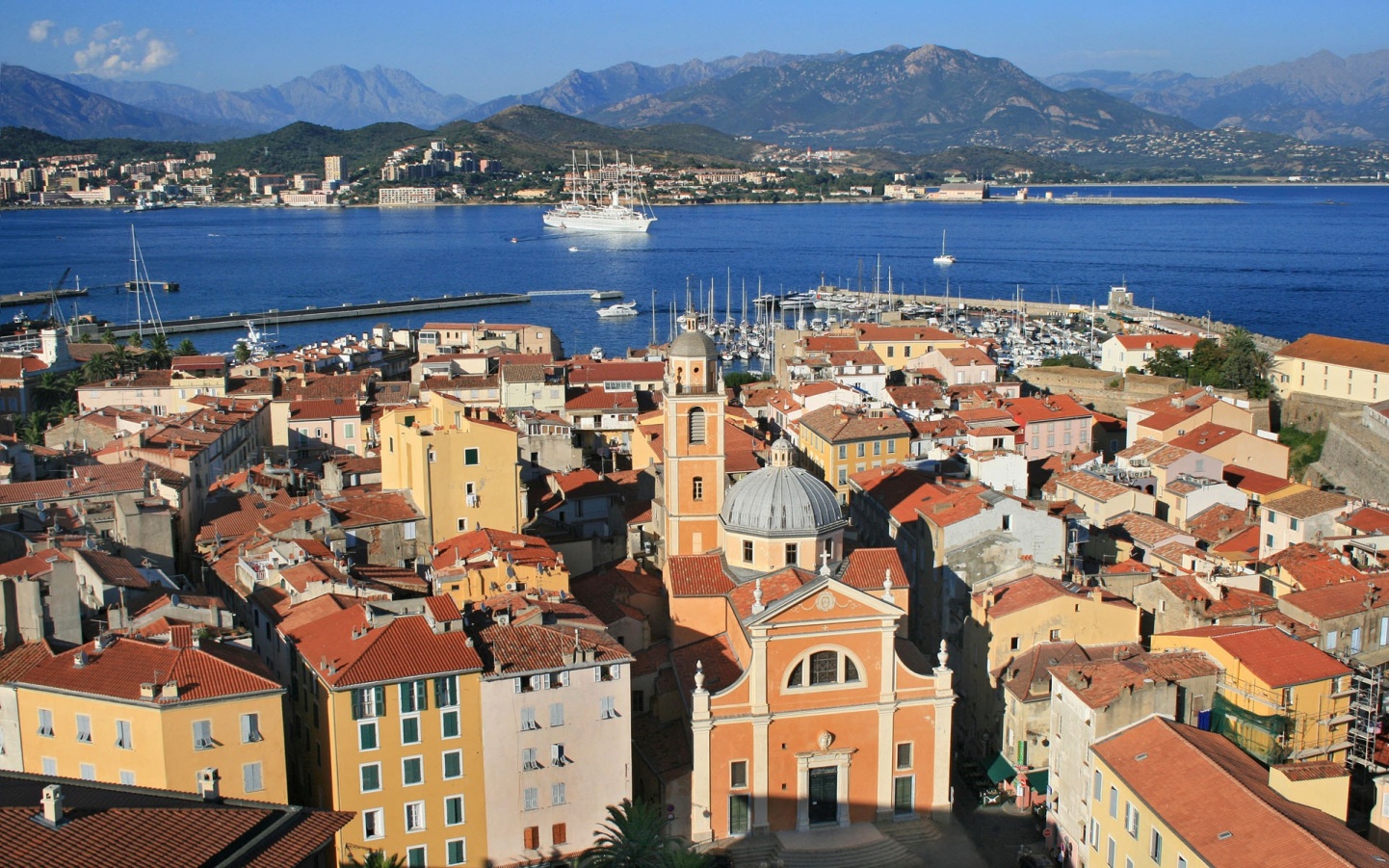 Ajaccio is located on a small peninsula on the shore of the bay and produces from the first approach the impression of the Cote d'Azur branch - the same rough terrain, towering immediately outside the city of the mountain (only here they are pink) and houses on the terraces.

In the south of Corsica is a magnificent isolated peninsula, composed of dazzling white limestone. On its southwestern coast, on a long and narrow cape, lies the most photogenic and colorful city of Corsica - Bonifacio (Bonifaciu), with the promenade of which is already visible Italian Sardinia. 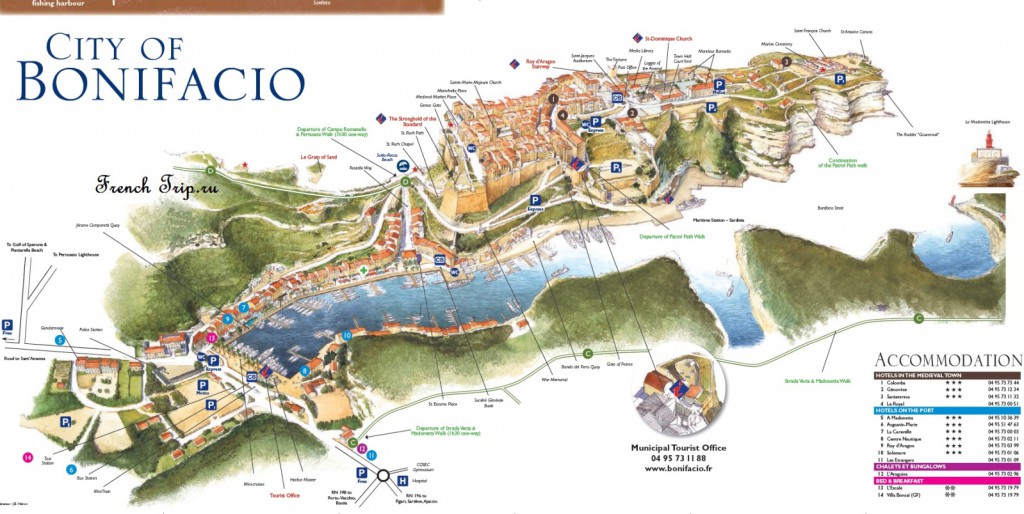 Crowned by white sea cliffs, the old town of Ot-Wil is a tangled network of narrow streets with high mansions of clearly Genoese style, crowning the deep cleft of the natural harbor. For many centuries, this excellent harbor at the entrance to the stormy strait of Bonifacio has sheltered thousands of ships, and these days has become a chic yacht parking lot, where ships from all over the world can be found. The city is quite isolated from the rest of Corsica and still retains its distinctive architectural style with a clear Renaissance influence, its dialect more similar to the Italian Ligurian, and its rhythm of life. Despite the exorbitant prices, crowds of tourists (especially in August) and the apparent commercialization of everything and everything (completely untypical for Corsica, by the way), Bonifacio clearly deserves at least a small stop, because this old Genoese republic can offer visitors and many historical monuments.

Resort Santa Teresa Gallura – the pearl of Northern Sardinia is located at the northernmost point of the island. The excellent logistics location of the resort is only 60 km from Olbia airport, 30 km from the coast of Costa Smeralda and the seaports of Palau and Olbia and 45 km from the capital of Costa Smeralda - Porto Cervo. The resort has yacht and sea transport ports, which allows tourists to make mini-cruises in the archipelago-reserve La Maddalena (La Maddalena) and visit the medieval fortified city-port Bonifacio (Bonifacio) on the French island of Corsica (Corsica). 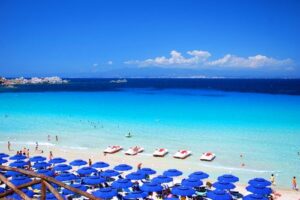 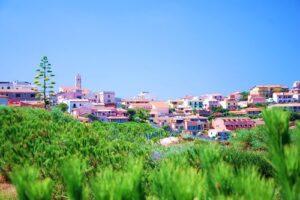 Very bright, picturesque town of Santa Teresa Gallura has a very cozy walking center with a main square and a medieval watchtower.All houses in Santa Teresa - both private and hotel with apartments, are painted in bright blue, pink, yellow, white colors and shades. One of the main attractions of Santa Teresa after the seaport is the magnificent beach of Rena Bianca. Closed from the wind a large bay with beautiful picturesque rocks, turquoise sea and the tiniest sand on the bottom with a gentle grove to the depth is ideal for families with small children, as well as for romantic couples. A picturesque path in the rocks from Rena Bianca beach to the seaport allows walking even with children, while admiring the panoramas of Santa Teresa, Corsica and the whole coastline.

In the evening from 16.00 shops and bars are opened, the streets are filled with holidaymakers who are waiting for the opening of restaurants 20.00.

Porto-Raphael is located in the homonymous town, which is part of the commune of Palau. Small beaches with coarse-grained sand of pink hue are surrounded by small rocks. They are located in the eastern part of Cape Sardinia (Punta Sardegna), namely in the vicinity of the village of Porto-Raphael. From the beach you can see a colorful view of the island of Santo Stefano lying opposite. 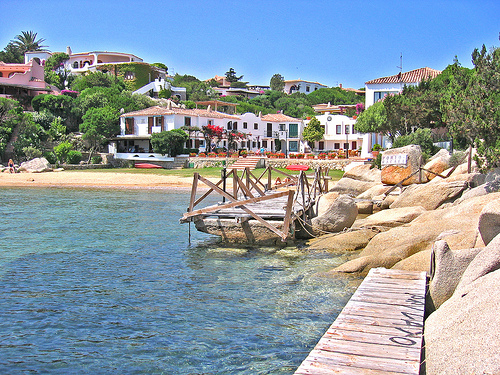 This part of the coast is characterized by azure shade of transparent waters, as well as granite rocks of rounded form rising above the water surface. The seaside village of Porto Rafael is very popular with tourists. In it the tourist service is developed, and the port is well equipped for pleasure boats. From the city center, which is still affectionately called "piazzetta" (literally "small square"), a picturesque view opens up on the English bay (Cala Inglese), which was dubbed the basin of the port of Raphael precisely because of the transparency of its waters.

Using the service of a rubber boat-taxi, you can conduct a tour along this colorful Mediterranean coast. The military fortress of the XIX century, majestically rising above the coastal zone, is of interest.

Porto Cervo, also called Porto Nuovo, is a beautiful Italian city on the island of Sardinia, the heart of the magnificent and fashionable resort of Costa Smeralda.

The history of the establishment of the resort is connected with the Arab sheikh - Prince Karim Aga Khan, who in the 60s of the last century bought land for the construction of luxury hotels. For the construction and design of the resort was invited architect Luigi Vietti (Luigi Vietti), who initially saw these places as a paradise for owners and simply fanatical lovers of yachts. This resort has become a mecca for yachtsmen, both from all over Europe, and from all over the world. In addition to all, Porto Cervo has a shipbuilding workshop, which is specially designed for the repair of snow-white beauties.

The town of Porto Cervo is built in an original style, perfectly combines elements of modern architecture and classical baroque. And the result was a harmonious, pretty town with covered vaulted galleries, stairs, small and large areas.

The city of Porto Cervo is not only interesting for its sea entertainments and yachts, but also for numerous excursions, shops and boutiques, as well as fashionable restaurants, bars, discos and pizzerias. The city has a lot of interesting entertainment for tourists, who knows a lot about luxury and comfort. On the territory of Porto Cervo is located one of the best Italian golf clubs "Pevero".

The magnificent resort of Porto Cervo will not leave anyone indifferent. It will always remain in memory of wonderful beaches, elite hotels, magnificent landscapes, numerous shops, restaurants and parties. It will appeal not only to the owners of luxury yachts, but to everyone who loves beach holidays and walks by the sea.